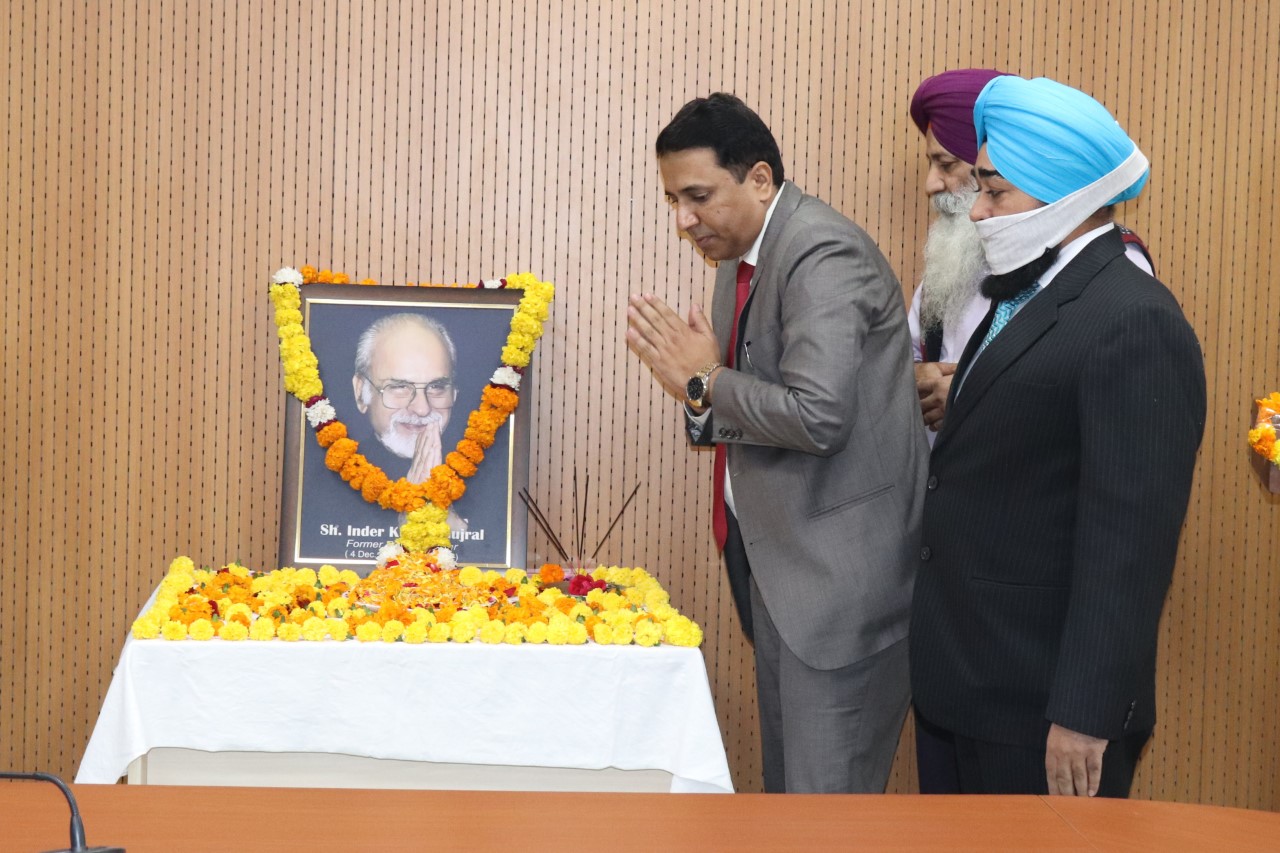 Celebration held at IKGPTU on the 101st birthday of former Prime Minister India late Sh. Inder Kumar Gujral Ji
Science and communication revolution is the basis of his ideal, University is moving in his this direction regularly: Vice Chancellor Prof. (Dr.) Sharma

“When there was an emergency in the country and brotherhood was at stake, no one was speaking openly, in such a situation, it was only Sh. Inder Kumar Gujral, who spoke openly in respect to brotherhood. He was the idols of harmony, sympathetic behaviour for society and brotherhood. Patriotism was in his blood from his family. When the Shaheed-E-Azam Bhagat Singh ji was being hanged, the Gujral family was at the forefront of the protests outside the jail. Gujral family faces jail in Quit India Movement & during many other freedom moments. These are the facts shared by member Rajya Sabha Sh. Naresh Gujral on Friday during his live address through e-platform at I.K.Gujral Punjab Technical University (IKGPTU). University organized an event on the occasion of 101st birthday of India’s 12th Prime Minister Late Sh Inder Kumar Gujral Ji. He was addressing as the keynote speaker.

Due to Covid 19, the event was held at a limited level in the university, in which thousands of people joined the university function through various e-platforms like Zoom, Facebook live etc.

Rajya Sabha MP Naresh Kumar Gujral shared his views in context of women education and its promotion, gender equality and scientific temperament. He also said that Politicians from the southern countries were always eager to meet and to hear Gujral Sahib. He was a supporter of a series of historic rich relationship eras in which neighbouring countries or riyasats were asked to live in a favourable and better relationship with their neighbours, as this policy gave them more progress.

Vice Chancellor IKGPTU Prof. (Dr.) Ajay Kumar Sharma said that subjects like science and communication revolution have been the basis of the ideal of Sh. Inder Kumar Gujral ji and the university is constantly moving in this direction. He said that it has always been that when an institution is named after a visionary great person, it helps to make that institute its ideal direction and that institution, its employees feel blessed.

On this occasion, University Registrar Sandeep Kumar Kazal gave his views on the “Gujral Doctrine” associated with the foreign policy of Late Sh Inder Kumar Gujral Ji. He said that it is a matter of pride that all five of his principles mentioned in Gujral Doctrine are still relevant. Registrar Kazal also talked about the vision of I.K. Gujral Punjab Technical University towards betterment of society and Technical Education at global level. He also touched the events which were associated & relevant to the city Jalandhar & Sh. Gujral Ji. Vote of thanks was delivered by Rajneesh Sharma, Public Relations Officer of the University. During the event senior officers Dr. Balkar Singh, Director ODL, Dr. RPS Bedi, Joint Registrar, Finance officer Dr Sukhbir Singh Walia, Controller of Examination Dr Paramjit Singh, Director main campus Dr Neelkanth Grover, Dr Satvir Singh & other were also present.