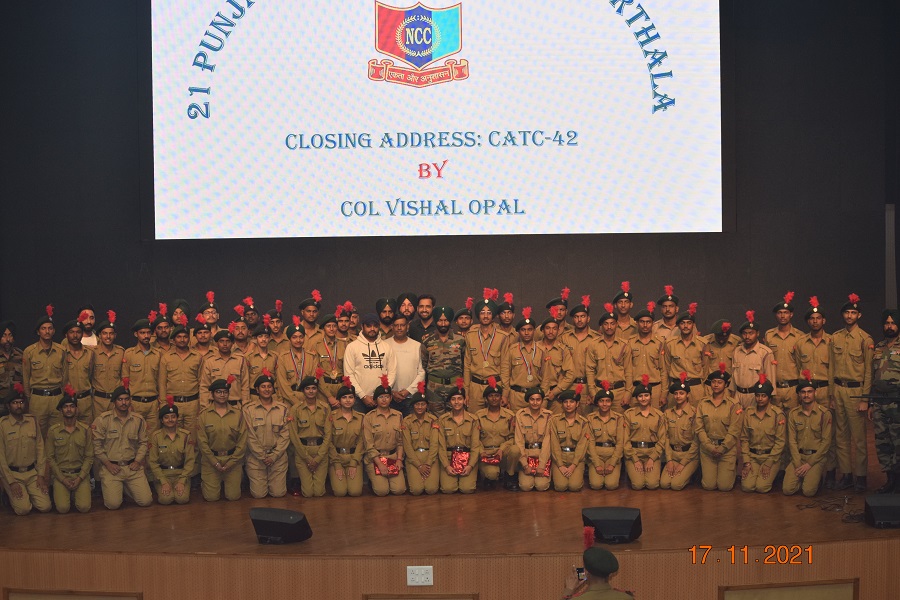 NCC stands for National Cadet Corps that provides basic training to the Cadets of schools and colleges for different wings Army, Navy and Air Force. It aims to groom Cadets into disciplined and patriotic citizens. NCC cadets are given the opportunity to participate in a host of adventure activities including Mountain Treks and Expeditions, Trekking, Parasailing, Sailing, Scuba Diving, Kayaking, Camel safari to hone leadership skills and enhance their character qualities. Various NCC Camps are held such as Combined Annual Training Camp (CATC), Basic Leadership Camp (BLC) Pre-Republic Day Camp (PRDC) , Advanced Leadership Camp (ALC), Course at Himalayan mountaineering institute Darjeeling, Para Troopers Camp (PTC), National Integration Camp (NIC), Army Attachment, Republic Day Camp (RDC), Hiking and Trekking Camp, Thal-sainik camp (TSC). The main Focus of NCC is on instilling discipline in the souls of the cadets, besides fostering healthy competition for the ranks, while keeping the greater interest of the nation in mind to create prospective officers for the Armed Forces. The National Cadet Corps is the only organization of its kind, which imparts Leadership, Discipline, Integration, Adventure, Military, Physical and Community Development training to over 15 lakhs youth of the country.
A summary of all the activities carried out by NCC unit of 21 PB BN NCC Kapurthala year 2021-22 are showcased.
A 10-day NCC combined annual training Camp (CATC-42) was organized by 21 Punjab BN NCC Kapurthala at I.K. Gujral Punjab Technical University. As many as 200 Cadets from various schools and colleges participated in the camp. Cadets were trained in drill and rifle shooting. They were also given exposure in cultural activities as well as in Sports.

First day was the inauguration day in which our commanding officer Col. Vishal Opal gave a powerful speech that motivated the cadets. The Aim and Objectives of NCC were cleared and also, he briefed us about the schedule and details of camps.
From the very next day the given schedule was followed by all the cadets. Schedule was very surprising for cadets, because it was fully packed with drills and lectures. The lecture was held daily according to schedule which including weapon training, Map reading, technical data of Riffles, Patrolling , Games and some other ground training that are used in Armed Forces.
On the other hand to enhance physical activity and develop leadership skills some Sports activities were held like 400M race, Volleyball and Basketball Tournaments. In which cadets participated with great enthusiasm.
On the 3rd day of camp we learnt how to assemble and dissemble a 0.22 rifle and how to clean it. We have been also briefed about Infantry, Artillary and Armoured and
In the evening 400m race competition was held in which 10 (SU) and 6 (SW) cadets participated and showed their spirit and hard work.
In this competition two SDs JAGROOP SINGH and ADARSH KUMAR, Cadets of IKGPTU got 1st Position and 2nd position respectively. From SWs all the three position holders were from IKGPTU, Komal Bansal, Archana and Sanjana got 1st position, 2nd position and 3rd position respectively. At the end of event winners were awarded by the Commanding Officer Col. Vishal Opal with customised Cups and medals.

On 4th day in morning we had lectures on assembling and dissembling of 7.62mm Self Loading Rifle and its characteristics, Indication of Landmark and and later in evening we had a public speaking activity in order to improve communication skills between the Cadets. Raghav Kumar from I.K.G. PTU gave lecture on Cyber security and how we can spread awareness in common people preventing thief and online fraud. Another cadet Ridham Saini delivered a powerful speech on geopolitical war.
On the 5th day, we had a lecture about field signal which included the theory as well as ground practice. We also learnt how to load and unload .22 Rifle and its firing position with hand on practice and in the evening we also had a seminar on stress management .On the same day tials for volleyball and basketball match were taken.
On the 6th day of camp a volleyball tournament was held in which 14 players participated. The teams were divided into A and B names. The Match turned out to be very interesting. It was played in three sets in which both the teams showed their full efforts to beat each other, but at last the team A won. The winners and runner up were awarded by Commanding Officer Col Vishal Opal by giving medals to winners and NCC shirts to Runner up teams. In the evening an awareness lecture was given by Rajveer Singh Rana ( Army officer ) & Raghav Kumar (student of I.K.G PTU) on Cyber-security and its importance in Army.
On 7th day of Camp a basketball Competition was held in which 14(SD) and 14(SW) cadets participated. The same enthusiasm and effort were seen among the Cadets.
The girls team B was commanded by Garima Chauhan from IKGPTU and Team A was commanded by Harmanpreet Kaur from IKGPTU. The boys team were headed by Deepak Kumar from IKGPTU (Team A) and Raghav Kumar from IKGPTU (Team B). From boys team B won and in girls side too team B won.
On 8th day in morning the half of the Cadets were taken to shooting range around (6:15 AM ) where the Cadets were given the opportunity to fire from 25 m away target by .22 Rif and the left Cadets in camp had their regular classes and drill .
On 9th day the remaining Cadets were taken to the shooting range and the other Cadets attended the regular lectures and drill. The camp fire was organised In the evening which included cultural program which was organised by the Cadets who showcased their skills and talents in extra-curricular activities. Cadets performed bhangra, group dance, poetry, singing, and shared the 10 days experience of camp.
On 10th day the closing ceremony was held and a closing speech was delivered by the commanding officer Col. Vishal Opal Sir. In the ceremony best shooters and best cadets were awarded with the medals. In shooting Jashandeep kaur and Harmanpreet kaur of IKGPTU got 1st and 2nd position later After that two best cadets were announced from SW and again the same two SW were awarded. From SD Jagroop Singh from IKGPTU and kunal singh. After this a beautiful present was given to Commanding officer and their team for their efforts and hardwork to successfully organising the Camp. The remaining formalities of the Cadets were completed and they all were sent back to their homes and colleges.